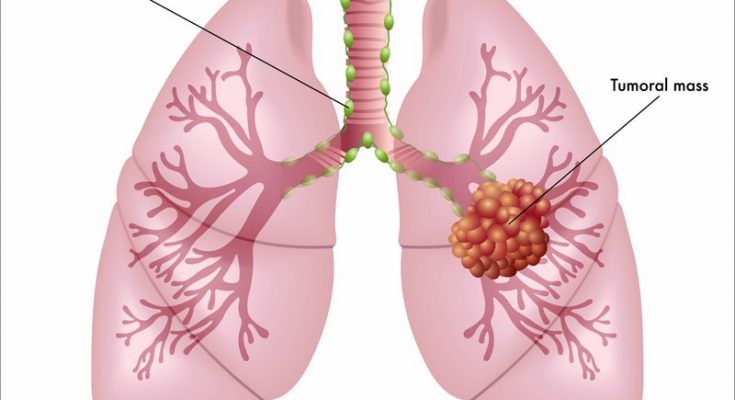 About 20% of all lung cancers are small cell cancers that are almost always caused by smoking. These cancers are composed of small dark cells that grow rapidly and metastasize (spread) early.

Eighty percent of lung cancers are classified as non-small cell cancers. About 30% of these are squamous cell carcinomas and about 40% are adenocarcinomas. Squamous cell carcinomas originate from the bronchial epithelium and form large well-defined tumors that spread locally and later metastasize. These cancers are highly correlated with smoking. Adenocarcinomas originate from cells of the mucous glands and appear to have no relationship with smoking. In general, NSCLC grows more slowly than SCLC.

Ten percent of all lung cancers are aggressive tumors composed of large cells. These cancers usually form in the periphery of the lungs.

Smoking is the chief risk factor for the development of lung cancer. Indeed, at least 80% of lung cancers are caused by smoking. The longer and more cigarettes one smokes increases the risk. However, the lungs can repair themselves and the risk is reduced by 30% 10 years after a person stops smoking. Secondhand smoke is a risk to nonsmoking family members and those that work in smoke-filled environments. Smoking marijuana may cause cancers of the mouth and throat as well as the lung, although the connection is tough to make because of the illegal nature of marijuana. However, marijuana is suspect because it contains more tar than tobacco, it is deeply inhaled and held in the lungs, and many cancer causing substances are found in marijuana.

Asbestos exposure in workers is a risk factor for the development of lung cancer. Asbestos workers are seven times more likely to die of lung cancer and are at a greater risk of developing a mesothelioma (cancer of the pleural membranes).

If you have any of the following symptoms, you should see your doctor. Symptoms of lung cancer:

When the cancer has spread to other organs, symptoms may be bone pain, jaundice, neurologic changes, or palpable masses near the body surface.

Several tests are commonly used to diagnose lung cancer including blood work (complete blood count), an examination of sputum and chest x-rays. Sputum samples will be examined for the presence of cancer cells. Sputum cytology is a specific test but is unfortunately an insensitive test. Other imaging modalities, such as CT scans, bone scan, MRI or PET scans may be done to find distant sites if the cancer has spread beyond the lungs. All lung cancer patients have an abnormal finding on chest x-ray or CT scan and over one half of patients have metastasis at diagnosis. Suspect masses may be sampled by biopsy and examined by a pathologist. Tests should be targeted to specific symptoms.

What is Pulmonary Rehabilitation?